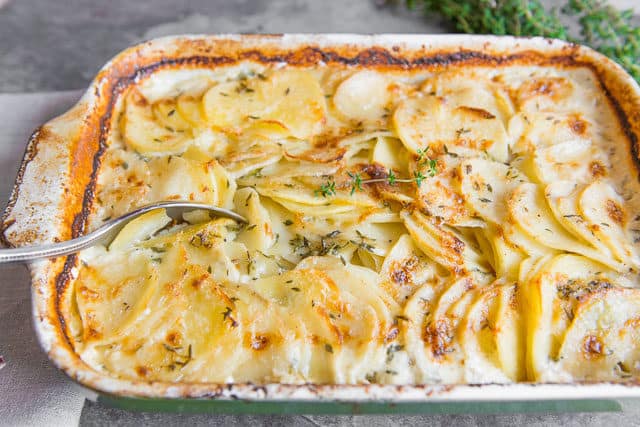 There are so many methods of making potatoes into yummy side dishes; they are always amazingly delicious and are perfect for Thanksgiving and Christmas. However, the two best ways of making potatoes look really alike that you can mistake one for the other. Many people use their names, au gratin potatoes, and scalloped potatoes, interchangeably, and since they’re both creamy and baked till they’re golden brown.

However, even though these dishes are both made from potatoes, they are not so alike and have few factors that distinguish one from the other. Wondering what the differences are? Keep reading to find out.

These two dishes differ when it comes to the toppings; au gratin potatoes usually have cheese or breadcrumbs as toppings that turn golden brown after baking. Scalloped potatoes, on the other hand, has no grated toppings. They both turn out brown, but with scalloped potatoes, the sauce gets brown, not the toppings.

This is the main difference between the two dishes; scalloped potato has no cheese, but au gratin potatoes contain cheese. Scalloped potatoes are mixed in a delicious cream sauce usually created with milk and heavy cream infused with aromatics like fresh herbs or garlic. Au gratin potatoes, on the other hand, requires lots of cheese. Cheese is usually spread between the potatoes and also at the topmost layer of the potato casserole. You can usually distinguish both potato casseroles by whether it contains cheese or not.

It’s easy to get confused about both side dishes, and with the many recipes online with new ingredients being added every time; it’s understandable how confusing it can be. However, one thing we can agree on about both dishes is how delicious and comforting both are. Both dishes also go well with anything as a side dish, and of a truth, getting the names mixed up is not a crime.